In this industry, you gotta be tough.

I’m just kidding. We’re a bunch of literates who enjoy reading so much that we built our own news readers. But when a behemoth like Google makes a call that places you at the business end of 100,000 frantic power users, reminding yourself how tough you are is one way of dealing with the madness.

Google announced Reader’s sunset at 4pm on March 13th, 2013. At that point I had spent three and a half years building my vision of a better news reader. I clearly wasn’t doing it for the money, since my paltry salary didn’t even cover my market rate rent in San Francisco. RSS was a decidedly stupid technology to piggyback off of to try and cover that financial disconnect.

Take a look at this graph. It shows NewsBlur’s income versus its expenses for the past 16 months. Just look at those few months before the Google Reader shutdown announcement in March 2013. 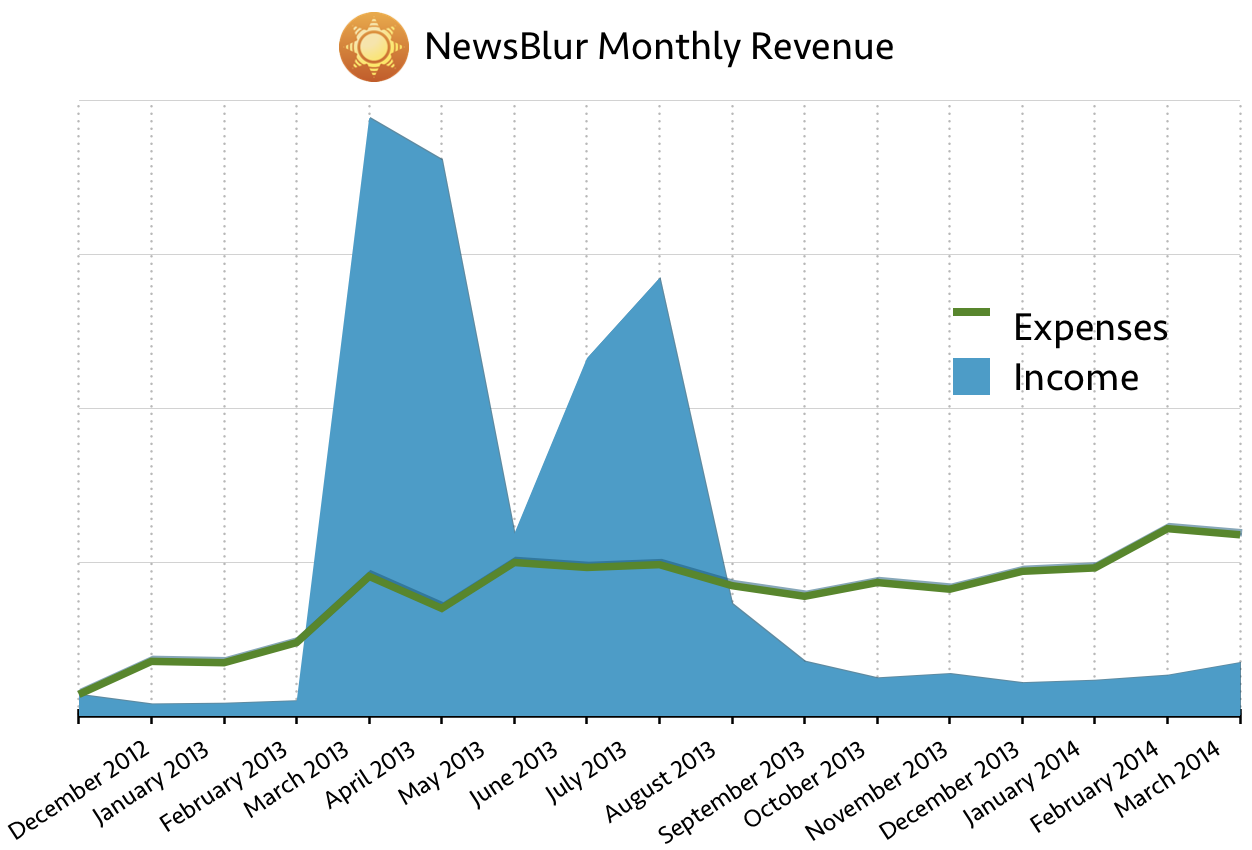 It was never hard to justify to others why I worked on a news reader for three-some years, partially because I’d been justifying it to myself for so long. I had the delusion that it would all work itself out in the end, so long as I kept pushing my hardest and shipping features users wanted. And, at the time, with 1,000 paying subscribers, it certainly felt like I was getting somewhere.

If you’re curious about why expenses are so high, think about what it takes to run a modern and popular news reader. This graph breaks down expenses for an average month from the past year.

Why spend all that money on subcontractors and new tools? Because I’m investing in building an even better news reader.

Fast forward a year and let hindsight tell you what’s what. I was irrational to think that I could make it on my own in a decaying market, what with all the air sucked out by Google. But that three year hallucination kept me persevering to build a better product, which positioned NewsBlur well as a strong candidate for a Reader replacement. When the sunset announcement dropped, it didn’t take long to fortify the servers and handle all the traffic. NewsBlur permanently ballooned up to 20X the number of paid users. People flocked to NewsBlur because it was among the furthest along in creating real competition. As we say on NewsBlur, the people have spoken.

I run a very opinionated news reader. If you think somewhat like I do, you couldn’t be more pleased with the direction NewsBlur goes. But this is still a power tool, and in a world of casual readers who don’t care where their news is coming from so long as it’s in their interests and matches their biases, NewsBlur is the coffee equivalent of the AeroPress. Most people want drip coffee and they don’t bother wasting mental energy on caring about the difference in taste or quality. It’s a binary to them: coffee or no coffee. There’s nothing wrong with that, they just choose to focus on other things more important to them than the sourcing or control they have of their coffee.

Many competing news readers are visual and offer a similar experience. When you want to give up control in exchange for the digested output of sophisticated and heartless algorithms, they’re your best bet. When you want to exert control and know what you want and from which sources, NewsBlur is the only option. No other reader gives you training, statistics, and sharing in one multi-platform app. Nobody else cares so much about RSS as to work on a news reader when it was still a financial inevitability of failure.

If the past is any indication, NewsBlur is going to continue to see many more improvements. This graph of contributions from the past 365 days shows my level of unwavering dedication.

One way people speak is by committing code to NewsBlur’s GitHub repo. Try developing your own pet feature. I’ll even do some of the hard work for you, so long as you give it a good try and submit a pull request.

Meanwhile, I’m using the windfall to develop a secret project that will complement NewsBlur in a way that hasn’t been tried before with any reader. And if that fails, I’ll find an even better way to make my users happy with their purchase. If you thought I was relentless before March 13th, 2013, just wait until you see what I’m capable of with the finances to build all the big ticket features I’ve been imagining for years.

And while you’re here, do me a favor and tweet about NewsBlur. Tell your followers, who are probably looking for a better way to read news, about how much you rely on NewsBlur. Reading positive tweets about NewsBlur every morning (and afternoon and evening and before bed) make this the best job I’ve ever had.